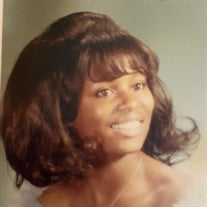 Anita Cheryl Jackson-Cotten passed away unexpectedly. Sunday morning February 7th, 2021; and heaven gained an angel. Anita was born Saturday, July 31, 1954 in San Francisco, California. Anita Cheryl Jackson-Cotten passed away unexpectedly. Anita during her childhood modeled; loved to roller skate Anita and helped her community with her membership in "The Leontanettes;" the local neighborhood club. Anita moved to Los Angeles as a teenager and attended Horace Mann Junior High School and Crenshaw High School (Class of ‘72). Anita ran track and was undefeated in all her track meets! Anita was also an excellent student and writer with beautiful penmanship. In her senior year, Anita was elected parliamentarian of her class and was voted Loudest Mouth. Anita attended California State University, Northridge. Anita had been retired for a number of years and worked for a number of companies throughout her career including IBM, Grubb & Ellis, Copley/Colony and Starkist - all for whom she traveled extensively throughout the continental USA. She loved her family and always had a story to share about her children and grandchildren. Anita’s presence filled the room with laughter and she loved to dance! Anita is survived by her mother, Dolores Jean Smith; her husband William Cotten; her daughters, Jeanna Works (Greg Cole) and Dior Cotten; her stepsons, William Cotten and Jordan Cotten; her siblings Denise Ginn (Larry), Karyn Ladeq (Scylar), Ruthie Foley (Rory), Pamela Hardeman, George Hardeman Jr. (Sherie), Gloria Hardeman, and Jackie Lockett (Larry); her grandchildren, Simone, Troi, Hannah, Alexis, and Lodon; 6 step-grandchildren; and a host of cousins, nieces and nephews. She was preceded in death by her father, George Hardeman Sr. (Olivia); her stepfather, John Jackson; and her brother Fredrick Jackson. Anita was a member of Bates Memorial Baptist Church in Louisville, KY and the Anita Jackson memorial scholarship fund is being established with the church in her honor. The family welcomes donations to the fund in lieu of flowers as expressions of sympathy. Anita’s life will be celebrated Wednesday, February 17, 2021 at A. D. Porter & Sons Funeral Home with walk through visitation from 11:00 AM to 1:00 PM followed by a private funeral for family and her closest loved ones. The funeral can be viewed virtually via A. D. Porter & Sons Funeral Home's website.

The family of Anita Cheryl Jackson-Cotten created this Life Tributes page to make it easy to share your memories.

Send flowers to the Jackson-Cotten family.