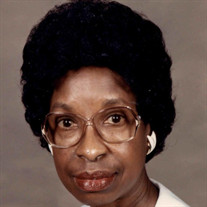 Athalene Buyck was born September 2, 1930 and was the second of six children born to Thomas Buyck and Annie Neely (both of whom preceded her in death) along with one sister, Algie Murel Hollenquest and four brothers, Tommy Lee Bykes, Thomas Felix Buyck, Henry Starson Buyck and James Edward Buyck. Athalene was born in Titus, Alabama and accepted Christ at an early age at Mt. Pisgah Baptist Church and continued to be steadfast in her faith in God until her very last breath on June 12, 2020. She graduated from Elmore County Training High School, Wetumpka, Alabama on May 24, 1949 and was the valedictorian of her class. She subsequently attended Alabama State Teachers College in Montgomery, Alabama, matriculating with a Bachelor of Science in Elementary Education on May 17, 1954. She moved from Alabama to Louisville in 1955 and became an elementary school teacher with Jefferson County Board of Education where she taught for 25 years from September 5, 1967 until her retirement on May 9, 1992. She united with the Centennial Olivet Baptist Church and served on the Usher Board for many years until health issues in 2017 made it no longer feasible for her to attend church on a regular basis. At her transition, she leaves behind brother, James Edward Buyck of Los Angeles, CA; nephews, Alvin (Patricia) Bykes of Louisville, KY, James Evander (Dawn) Buyck of Jeffersonville, IN, William David Buyck of Louisville, KY and Glen Hollenquest of Detroit, MI and nieces, Hazel Ann Hollenquest of Detroit, MI, Devie Benard of San Bernadino, CA, Artemesia Moore of Banning, CA and goddaughter, Vickie Bond (Carlton) of Louisville, KY plus a host of great-nephews and nieces and cousins, along with an extended family of friends she made along the way in life. Visitation: 10am-12pm Saturday, June 20, 2020 at A.D. Porter & Sons Southeast, 4501 Bardstown Rd., with funeral to follow at 12 noon. Burial: Green Meadows Cemetery.

Athalene Buyck was born September 2, 1930 and was the second of six children born to Thomas Buyck and Annie Neely (both of whom preceded her in death) along with one sister, Algie Murel Hollenquest and four brothers, Tommy Lee Bykes, Thomas... View Obituary & Service Information

The family of Athalene Buyck created this Life Tributes page to make it easy to share your memories.

Send flowers to the Buyck family.