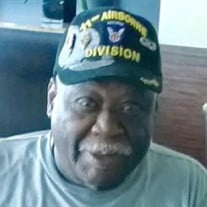 Charles Mack Nave was born on October 14, 1932 in Brazil, Indiana to the late Freddie Leigh Paige and Charlie Nave. Mr. Nave departed this life on Saturday, May 30, 2020 in Louisville, Kentucky. He was educated in Indiana by attending and graduating from Brazil High School; educated in the army and educated with a culinary background from Milwaukee, Wisconsin. He was a member of Second Baptist Church in Brazil, Indiana and later a member of St. Paul Baptist Church in Terre Haute, Indiana. A member of the Order of the Eastern Star, the Masonic Lodge family and other affiliates. He was married for 47 years to the late Lula M. Nave. He served proudly in the Army for 26 years and retired to Terre Haute, Indiana where he then worked 20 years with the U.S. Federal Penitentiary. He enjoyed life and loved his family; a good conversationalist, very charismatic, an avid reader, a world traveler, fluent in several languages and strong minded to the end. He cherished his grandchildren and was proud of their accomplishments. He lived at St. Matthews Health Center in Louisville, Kentucky for 13 years with the loving assistance of Mae Thomas, Denise Duncan and many others. Mr. Charles M. Nave was loved and survived by his daughter, Freda L. Nave-Churchill (Marc), grandchildren, Marcus, Charles, Malka, and Alexandria Churchill; devoted sister, Shirley Thomas (late Clarence Thomas); step-sister, Doris Southers and sister-in-law Jenny M. Nave; and host of nieces, nephews and an abundance of friends. He is preceded by his loving wife, Lula M. Nave; brother, Wesley Nave; step-brother, William (Bookie) Southers; two sisters, Mary Francis McPheeters and Betty Joe Thompson. You were a good husband, father, and friend. You will truly be missed! The Family

Charles Mack Nave was born on October 14, 1932 in Brazil, Indiana to the late Freddie Leigh Paige and Charlie Nave. Mr. Nave departed this life on Saturday, May 30, 2020 in Louisville, Kentucky. He was educated in Indiana by attending and... View Obituary & Service Information

The family of Charles Mack Nave created this Life Tributes page to make it easy to share your memories.

Send flowers to the Nave family.