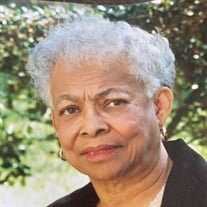 Charlotte Geraldine Jackson Alexander departed this life into eternal rest at the age of 93 on Wednesday, March 2, 2022. Charlotte was born on February 10, 1929, in Chicago, Illinois. She was one of five children born to the late Temple and Eretta Cotton Jackson. She was a 1947 graduate of Englewood High School in Chicago and was employed at Spiegel when she met her future husband, James “Jimmy” Alexander, through mutual friends. They married in 1955 and made their home in Louisville. Charlotte and Jimmy built a beautiful life together in the West End of Louisville. They had two children, Michael and Helen, and were members of Christ the King Catholic Church. Charlotte worked for Jefferson County Public Schools before retiring in 1993. As a Teacher’s Assistant, she had the opportunity to help many children over the years and some of the people she worked with became her lifelong friends. She thoroughly enjoyed spending time with family and friends. Her favorite hobby was traveling. If she had family or friends with her on the trip, that made it all the better. She took many trips to cities in the United States and places abroad, including cruises in the Caribbean Islands and a trip to the Holy Land. Her love of photography, which she developed at an early age, came in handy. She kept a treasure trove of pictures of the places she had seen and the people she loved. Charlotte was extremely thoughtful. She always remembered birthdays and was known to send cards -- maybe even with a little money inside -- to make people feel extra special. She mastered using her smart phone when she was in her 90’s and that became a new way for her to reach out to people with thoughtful texts and emojis to uplift them. Her husband of 62 years, James Alexander, preceded her in death in 2017. She also was preceded in death by her parents, her sister Marion and her brother Charles. She leaves to cherish her memories: her son Michael Alexander (Tramell) of Evanston IL; daughter Helen Alexander of Indianapolis IN; granddaughter Adrienne Alexander (Alex) of Chicago IL; grandson Anthony Alexander of Los Angeles CA; two great-granddaughters Caridad and Esperanza of Chicago IL; brother Temple Jackson of Ontario, CA; sister Helen Carr (Roosevelt) of South Holland, IL. She leaves a host of nieces, nephews, other family members and many dear friends. Charlotte was one-of-a-kind and will be sorely missed by the many people whose lives she touched. Visitation: 9:30am-11am Saturday, March 12, 2022 at Christ the King Catholic Church, 724 S. 44th Street, funeral service to follow at 11am. Burial: Calvary Cemetery.

Charlotte Geraldine Jackson Alexander departed this life into eternal rest at the age of 93 on Wednesday, March 2, 2022. Charlotte was born on February 10, 1929, in Chicago, Illinois. She was one of five children born to the late Temple and... View Obituary & Service Information

The family of Charlotte Geraldine Alexander created this Life Tributes page to make it easy to share your memories.

Send flowers to the Alexander family.