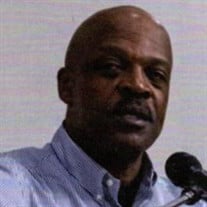 Darryl Roosevelt Bishop was born in Louisville Kentucky on August 27th, 1950, to his parents the late Barbara Jean Bishop and Roosevelt Davies. He peacefully passed from this life the morning of February 8th, 2022 after a gradual decline in health. Darryl attended Newburg Elementary and Seneca High School in Kentucky where he excelled in his studies and in sports. While at Seneca High School Darryl became an outstanding star athlete in football, basketball, and in track and field. In his senior year he made All-State in football and basketball. This got him a lot of attention from colleges across the country that wanted to give Darryl a scholarship. However, Darryl was a hometown HERO and he decided to take the offer from the University of Kentucky which was an hour away from home. While at UK he couldn’t play his freshman year of football during that year the assistant basketball coach Joe B. Hall approached him and asked him to try-out for the basketball team. Darryl tried-out for and made the team, becoming the “THE FIRST BLACK PLAYER” to wear the University of Kentucky wildcats’ basketball jersey. While he only played 6 games with the team he was able to return to football his sophomore year. While playing football, Darryl excelled on the gridiron and he still holds the most records for (14) interceptions and (348) tackles as a defensive back and return yardage of (367) as we speak in the year of 2022. Darryl graduate from the University of Kentucky with a degree in communication. He was drafted by the Cincinnati Bengals in the year of January 1974. After a short stint with the Bengals, he went to play for the World Football League that resulted in him seriously injured his left knee and ending his career in football and the team doctors told him to go get his knee treated at New England Baptist Hospital in Boston Massachusetts. Darryl decided to make Boston Massachusetts his home where he lived for the last 40+ years until his passing. While in living in Boston he worked for Detention Youth Services (DYS), the Boys and Girls club in Roxbury. He coached at the Cathedral High School and the Shelburne Community Center where he retired from in 2017. He impacted hundreds if not thousands of young men and women from different backgrounds and ethnicities. Darryl leaves to mourn in passing, his loving children; daughters; Nesha Ellery-Parker (Daryl), grand-children, Jeffery, Ja’Mont, Ja’Nisha Elery, Ja’Nay Ashby ( Louisville Kentucky), Antimony Bishop ( Minnesota Minneapolis), Darrilyn Brooks-Jones ( Lindsay), grand-children, Jasmyne, Diamond, Justin, and London ( Boston MA/Baltimore Maryland), Son; Darryl Cato-Bishop ( North Carolina), step-daughters; Coryn Dillahunt-Moore ( Boston MA) ,and Undrea Steele-Cato, ( Los Angles California). Sisters; Judy K. Bishop, Lawanda Stafford, Bothers; Jay Maharris-Greer (Tricia), Steven Davies (Amy), (Louisville Kentucky), and his longtime companion, Patricia Cato (Boston Massachusetts), nieces, nephews, great nieces, cousins, and his good friends; Owen Corbin, and John Favors (Boston MA), and many friends. He proceeded in death by his sister, Denise Bishop, and his brothers, Bruce Bishop, Louise Bishop, and John R. Davies. Special thanks to the staff at the Shelburne Community Center #2370 Visitation: 9am-11am Saturday, March 5, 2022 at New Covenant Baptist Church, 1190 S. 40th St., funeral service to follow at 11am. Burial: Resthaven Cemetery.

Darryl Roosevelt Bishop was born in Louisville Kentucky on August 27th, 1950, to his parents the late Barbara Jean Bishop and Roosevelt Davies. He peacefully passed from this life the morning of February 8th, 2022 after a gradual decline in... View Obituary & Service Information

The family of Darryl Bishop, Sr. created this Life Tributes page to make it easy to share your memories.

Darryl Roosevelt Bishop was born in Louisville Kentucky on August...

Send flowers to the Bishop, family.