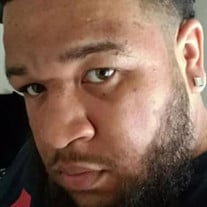 Dejuan Broadway, 37, passed away Sunday, October 10,2021 De Juan was born to his mother, Arnessa Beamon (Nolvia) and father Tony Maddox on Sunday, October 7th, 1984, in Louisville, KY. He was his mother’s best kept secret, as only she knew that she was expecting him. He quickly stole the hearts of the entire family, especially his great grandmother (Harvetta Horn). He would soon be joined by a host of other lifelong best friends in the form of cousins and his little sister. From an early age Dejuan showed an interest and love for music. The only thing to quiet him most nights was the sound of the Platters greatest hits from his great-grandmother's record player. Dejuan made it known as a teenager that he wanted to pursue music, so his parents bought him his first professional keyboard. His sisters and cousins thought it was illest thing they’d ever seen. It wasn’t too long before he’d self produced a short album, creating one of his mom’s favorite songs, to this day, "Jello"! He also excelled in the classroom and broke ankles on the basketball court from Louisville to Brooklyn to Queens, NY. There wasn’t much he couldn’t do. Dejuan went on to graduate with honors from St. Xavier High School in 2002. Dejuan excelled greatly in his second love which was math. There was nothing math related that he couldn't solve. His love and immense passion for music never waned. The only thing he loved more than that was his family. Beyond his gift and supernatural ability in his music studio, in everyday life, Dejuan was able to captivate all who knew him with his smile, his sense of humor and that amazing laugh! Our world is a little quieter without him; he will be sorely missed. Dejuan leaves behind to forever cherish his memory: his mother Arnessa , his bonus dad Nolvia, his two younger sisters, Amber and Cydney, his brothers, Tony, Trent and Trey Maddox, his grandparents Linda and Nolvia Beamon and Sandra and Lee Maddox, and many beloved aunts, uncles, cousins and friends. He was preceded in death by his granny Vicky Broadway, gr-grandmother Harvetta Horn, great aunt Debra Cork, favorite cousin Jason Cork.

Dejuan Broadway, 37, passed away Sunday, October 10,2021 De Juan was born to his mother, Arnessa Beamon (Nolvia) and father Tony Maddox on Sunday, October 7th, 1984, in Louisville, KY. He was his mother&#8217;s best kept secret, as only she... View Obituary & Service Information

The family of De Juan Broadway created this Life Tributes page to make it easy to share your memories.

Send flowers to the Broadway family.