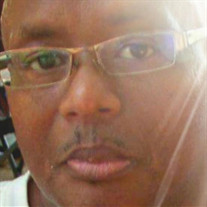 Earl A. Coleman, (Lil Man) transition peacefully in Louisville, KY, on September 7, 2018, at the age of 54. He was born in Louisville, KY, on September 8, 1963 to Earl A. and Roberta B. Coleman. He attended Central High School. He is survived by his children Ms. LeJoy D., Mr. Earl A.III, and Ms. LaTasha A. Coleman, and Mr. Aaron W. Brashear (Aleesia). His mother Ms. Roberta B. Coleman, his sisters Ms. Dion Coleman-Parkins, Warner Robins, GA, Ms. Pamela (Tracie) Hunter-Bowens, Winston-Salem, NC, his brothers George (Maxine) Frazier, Norfolk, VA, Cleave, Paul and JeCory Frazier, all of Louisville, KY, his brother/cousin Mark Ray, Detroit, MI. He was predeceased by his father Mr. Earl A. Coleman. He was predeceased by his Father Earl A. Coleman, Sr, his step-mother Jackie Frazier-Coleman, and his daughter Mrs. Earlene A. Nelson. He leaves behind to cherish his memory, 12 grandchildren, several nieces, nephews, cousins and a host of other relatives and friends Visitation only Monday, September 17, 2018 from 12pm to 1pm At A. D. Porter & Sons, 1300 W. Chestnut St.

The family of Earl A. Coleman Jr. created this Life Tributes page to make it easy to share your memories.

Send flowers to the Coleman family.