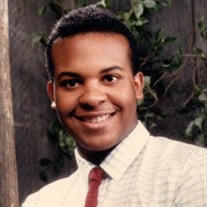 Edward N. Hamilton, III, 53, of Louisville, KY, died on Monday, January 11, 2021 at 4:11pm in Orlando, Florida. Ed attended Male Traditional High School. After graduation in 1986, he attended Jefferson Community College and majored in Culinary Arts. Ed was recruited by Walt Disney World and moved to Orland, FL in 1988 and began working for Disney. He lived and worked in Orlando for 30 years in the food service industry. Edward, known as Eddie to his family, is survived by his mother and father, Bernadette and Ed Hamilton, Jr.; his sister, Kendra Hamilton-Wynn and her husband, Horace L.; uncles, Caldwell, Michael, his wife Kathy, Stephen and John Chapman; aunts, Betty Strasser and her husband Eric in TX, Cardell Smith and her husband Bennie in MI, and numerous cousins. We send special thanks to his many friends and acquaintances in Florida. Visitation with the family will be held from 10am-11am on Thursday, February 4, 2021 A.D. Porter & Sons, 1300 W. Chestnut St. A private Memorial Service to follow at 11am. Service will live stream via www.adporters.com. In lieu of flowers, please make Memorial gifts to The Barber Fund, Inc., P.O. Box 536118, Orlando, FL, 32853-6118.

The family of Edward N. Hamilton, III created this Life Tributes page to make it easy to share your memories.

Send flowers to the Hamilton, family.