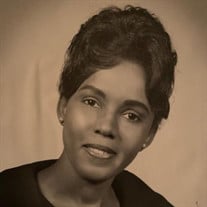 Eloise Marie Broady Amos, 92, of Louisville entered into eternal rest on Saturday, February 20, 2021 surrounded by her family and friends. Eloise was born in Paducah, KY to the late James Broady Sr. and Mary Elizabeth Short Broady. She was preceded in death by her husband, the late Dr Robert L. Amos, Jr., her parents, five brothers and four sisters. Religion was a central force in her life. Eloise joined the Washington Street Missionary Baptist Church in Paducah, Kentucky in the 1930s. She moved her membership to the Virginia Avenue Baptist Church after moving to Louisville in 1962. She would later join The Greater Tabernacle Missionary Baptist Church where she attended until failing health prevented her. Education was always emphasized in Eloise’s life. A 1946 graduate of Lincoln High School in Paducah, she excelled at Paducah Junior College when she bravely enrolled with a small African-American group with the purpose of integrating the school for the first time. After moving to Louisville, she enrolled at the University of Louisville full time after working in the university print shop for one year. She would later earn two Masters degrees from Western Kentucky University; one in Secondary Guidance and Counseling and a second one in Principalship and Administration. Working as an educator for 21 years, Eloise was employed by the Louisville Board of Education as a Business Education teacher and later as Assistant Director of Finance and Assistant Principal for the Tuition Night School and the Tuition Summer School. Upon the merger of the county and city schools, she once again taught high school Business Education courses for fifteen more years until retirement for the Jefferson County Public Schools in 1989. One year after retirement, Eloise became a licensed real estate agent. She worked for Paul Semonin and later Vantage Seven Realties. Carrying on Eloise's legacy are her daughter, Joan Renee’ Ray of Louisville; two first cousins Naomi Ward and Mary Anna Smith; nine nieces, three nephews; many grand nieces and nephews, cousins and a host of extended family and friends. Visitation: 3pm-5pm Friday, March 5, 2021 at A. D. Porter & Sons Funeral Home, 1300 W. Chestnut St. Funeral service will be private. View funeral services by clicking this link:https://vimeo.com/517168753

Eloise Marie Broady Amos, 92, of Louisville entered into eternal rest on Saturday, February 20, 2021 surrounded by her family and friends. Eloise was born in Paducah, KY to the late James Broady Sr. and Mary Elizabeth Short Broady. She was... View Obituary & Service Information

The family of Eloise Marie Broady Amos created this Life Tributes page to make it easy to share your memories.

Send flowers to the Amos family.