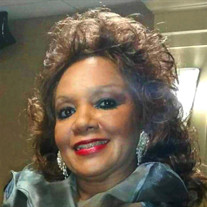 Evangelist Mikki Walton, 64, of Louisville, KY proceed to glory on Tuesday, January 6, 2020. She was born in Selma, AL to Willie Hogan and Mary Walton who preceded her in death. Mikki was an evangelist and legend in the Louisville gospel scene. Known as a passionate speaker, dynamic performer, and skilled manager, she was recognized by the City of Louisville as a Distinguished Citizen in both 1999 and 2003 for her contributions to the city both musically, and as a black female entrepreneur. As owner of the EMW Executive Consignment Clothing Store for over 3 decades in the heart of downtown Louisville, she often would give professional clothes to women from homeless shelters, domestic abuse survivors, and just about anybody who couldn't afford it so they would feel empowered enough to go on job interviews, work in office environments, or just to be able to attend church and look nice. May 17, 1998 was designated by the City of Louisville as Mikki Walton Day. She is survived by sister-in-law's Barbara Walton of Lima, OH and Rosetta Walton of Louisville, KY; sister LaNorah Jordan (Gregory) of Louisville, KY; nieces Octavia Thompson of Atlanta, GA; nieces Pamela Walton, Phyllis Walton, Penny Walton, Tonya Walton, and Michelle Walton all of Louisville, KY; nephews David L. Walton, II of Columbus, OH and Cedric Walton; a special niece, Brittney (Jay) Walton-Mitchell of Selma, AL; four special cousins: Sammy Walton and Nathaniel (Vickie) Walton both of Lima,OH and Aaron (Lakisha) Walton of Columbus, OH, and Adele (Willie) Stallworth of Chicago, IL; and many friends, including Missionary Dee Still. She is preceded in death by a sister Clemmie Walton, and brothers Eddie Walton and David Walton. Visitation is Saturday, January 18, 2020 from 10 am - 12 noon, at King Solomon Missionary Baptist Church (1620 Anderson St., Louisville, KY) with the funeral service to follow immediately at 12 noon. Interment will be at Louisville Cemetery.

Evangelist Mikki Walton, 64, of Louisville, KY proceed to glory on Tuesday, January 6, 2020. She was born in Selma, AL to Willie Hogan and Mary Walton who preceded her in death. Mikki was an evangelist and legend in the Louisville gospel scene.... View Obituary & Service Information

The family of Evangelist Mikki Walton created this Life Tributes page to make it easy to share your memories.

Send flowers to the Walton family.