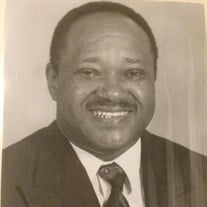 Floyd C. Taylor Louisville - 74, gained his angel wings on October 30, 2020 under Hosparus Care at Baptist East Hospital. Floyd was born in Shelby County, Tennessee, December 24, 1945, to the late Joe A. and Mala Richmond Taylor. He graduated from Tennessee State University with a degree in Chemistry in 1966. He came to Louisville, to be a product development chemist with Celanese. He went on to get an MBA from UofL and worked for Kentucky State Government for 27 years where he was Director of Small and Minority Business. He served continuously under seven different governors as an appointed public servant. He was a founding partner of Christian & Taylor Tax Service. He was an avid UofL athletics fan, especially men and women’s basketball and football. He was a member of Green Castle Baptist Church for over 20 years. He was a board member of the Louisville Science Center and Campbellsville University. He was a founding board member of KMSDC and a lifetime member of the NAACP. Also, he was the chairperson on the steering committee for African Americans in Thoroughbred Racing Exhibit at the Kentucky Derby Museum. He was a member of Sigma Pi Phi Fraternity Inc., Psi Boule chapter. He is preceded in death by his parents, Joe A. and Mala Richmond Taylor; stepmother, Iola Taylor; “Louisville adopted parents” Dr. Jesse and Geneva Howard Bell; brothers, Joseph, Argilea Sr., James, and Charles; sister, Jean Marie Taylor Belle; and first wife, Sandra Jones Taylor. Floyd leaves to cherish his memories his wife, Patrice; daughter, Annetra; sister-in-laws, Lillie Taylor (Memphis, TN), Norma J. Taylor (Flint, MI), Sherrie North (Louisville, KY) and Theresa N. Rogers (Frederick) (Atlanta, GA); and a multitude of loving nieces, nephews, family, and friends. The family wishes to thank those who cared for him through Homewatch Caregivers, Hospice of Louisville, Baptist East Hospital, as well as Donna and Ernest Jefferies. Visitation will be on Friday, November 13, 2020 from 4 pm to 6 pm at A D Porter & Sons Funeral Home 1300 W. Chestnut St., with a celebration of life taking place Saturday, November 14, 2020 at 11 AM at Green Castle Baptist Church, 4970 Murphy Lane, with burial to follow at Cave Hill Cemetery. Expressions of sympathy may be made in his name to: Alzehimer’s Association or to Tennessee State University’s Elbert Gray, Jr and Vernice Taylor Gray’s memorial scholarship, a family scholarship fund .

The family of Floyd C. Taylor created this Life Tributes page to make it easy to share your memories.

Send flowers to the Taylor family.