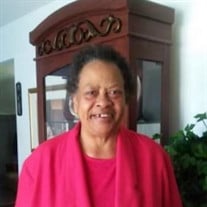 Francine Taylor passed away on December 3, 2021, at the age of 66 surrounded by her loving family. On September 24, 1955, she was born in Louisville, Kentucky to Frank and Ella Eaves. She accepted Christ at Broadway Temple AME Zion Church and continued her faith at Taylortown AME Zion Church. She was a faithful Christian and a humble servant. Francine graduated from Ballard High School in 1974, where she ran track and played basketball. She graduated from Jefferson Community College with an Associates Degree in Accounting. Working at McDonald's for over 20 years she was a familiar and kind face to her customers. Francine was preceded in death by her father, Frank Eaves, and her sister, Donna Eaves Thuita. She leaves to cherish her memory, her daughter Paula Taylor, mother Ella Eaves, her three brothers Carey Eaves, Larry Eaves, Jerry Eaves, and a host of nieces and nephews. Francine, affectionately known as "Fran," was a sweet person with an infectious laugh who loved spending time with her family and a UofL Sports fan. Of course, her favorite color was red since she was a true Cardinal Fan. Fran enjoyed watching football and women's basketball. Her favorite women's team was the University of Tennessee, led by the winning coach Pat Summitt. Fran was also a fan of the Chicago Bears football team. She enjoyed spending time relaxing and watching sports. She will forever be remembered as a loving mother, beloved sibling, and kind-hearted friend. The wake is scheduled for at 11:00 a.m followed by the funeral service at 12:00 p.m on Thursday, December 9th at A.D Porter and Sons Funeral Home Southeast. Reverend Erich Shumake from Taylortown AME Zion Church will officiate. Flowers, donations, and condolences can be sent to A.D Porter and Sons Funeral Home located at 4501 Bardstown Road Louisville, Ky. 40218.

Francine Taylor passed away on December 3, 2021, at the age of 66 surrounded by her loving family. On September 24, 1955, she was born in Louisville, Kentucky to Frank and Ella Eaves. She accepted Christ at Broadway Temple AME Zion Church and... View Obituary & Service Information

The family of Francine Taylor created this Life Tributes page to make it easy to share your memories.

Send flowers to the Taylor family.