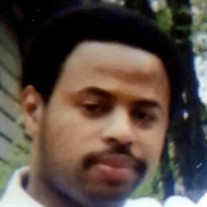 Grego Tyrone Scott (Tazan), of Louisville, KY passed away peacefully at the age of 49 in Jewish Hospital on April 1, 2020. Glenda Jean Scott and Vernon Odell Bullock (deceased) welcomed their child, Grego, into the world March 7, 1971. Growing up, he loved basketball and music but thoroughly enjoyed making people smile and laugh. He truly had a heart of gold. Grego made a career path for himself in computer engineering but soon realized music was calling. He began selling mixtapes and made a name for himself, known as Tazan. Outside of music, Grego enjoyed spending time with his family and friends. He is survived by his mother, Glenda Scott; brother, Damon Scott; sister, Kim Scott; daughters, Brittany Baker and Dejonae Hawkins; son, Grego Scott Jr; granddaughters Bella Perkins and Aryanna Hawkins; nieces, Marquita Alexander, Kiara Alexander, Taylor Scott; nephews, Anthony Alexander, Shawn Watts Jr., and Damon Scott Jr. and a host of many dear great nieces, nephews, cousins and good friends. Grego’s personality was truly electrifying and is a soul that will be dearly missed. “Daddy, your guiding hand on my shoulder will remain with me forever.” -Bebe

The family of Grego Tyrone Scott created this Life Tributes page to make it easy to share your memories.

Send flowers to the Scott family.