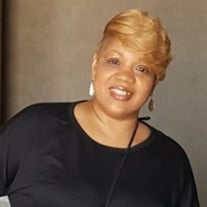 Gwendolyn Denise Bell (birth name) at 52 years of age, passed away Friday, March 18, 2022 at Jewish Hospital with her family by her side. Gwendolyn, nicknamed “Pinkie”, was born September 30, 1969 in Louisville, KY to Patsy and David Bell. Gwen, as I called her, “Pinkie”, as you know her, loved her Louisville Cardinals but they fell second to her Pittsburgh Steelers; as a die-hard fan she remained her entire life. Gwen was a member of Bethel Baptist Church. Her hobbies included cooking, traveling, roller skating, swimming and loved comedy shows and plays. She graduated from PRP High school in 1989. She did not attend college because she already had a degree in culinary arts. Gwen’s cooking is about like this obituary I am writing; not having the right spices makes food taste bland, by not having the right words does not do her life justice. She never wrote recipes, never measured and rarely had to taste her food during preparation. We tried many restaurants in numerous cities. We would both laugh and say, “that was good or ok!” She was constantly asked about opening a restaurant or food truck. Her answer was always, “I enjoy cooking for my family and friends.” Knowing what we know now, she was battling deficient blood flow from birth. She knew her limits and I respected that. With that being said, she became the Facebook Queen. Never was a dull moment on Facebook if Gwen had anything to do about it. She was thrown in Facebook jail more than John Gotti! There was no one funnier on Facebook than Gwen. She will be missed. She kept her family and friends close. Her grandchildren meant everything to her. Gwen didn’t have a driver’s license, but her directional knowledge was better than GPS. Gwen was a beloved by everyone. She was a beloved consort, mother, grandmother and friend who loved to entertain. She is survived by her life partner-consort, Ralphael Harvey Sr.; her five beautiful children, Lawon, DeSean, Dominique, Queen Shakala and Princess Raquel; stepsons, Ralphael and Ferris; siblings, Tim, Rodrick and Monica; twelve grandchildren, numerous nieces and nephews and a host of friends. Thank you all for your prayers and being there for our family in our time of need. Visitation: 6pm-8pm Thursday, March 24, 2022 at A.D. Porter & Sons Southeast, 4501 Bardstown Rd. Funeral: 12pm Friday, March 25, 2022 at the funeral home. Burial: Green Meadows Cemetery,

The family of Gwendolyn Denise Bell Harvey Bartlett created this Life Tributes page to make it easy to share your memories.

Send flowers to the Bartlett family.