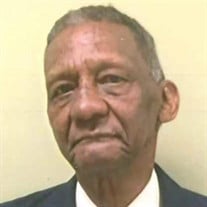 James Jefferson Ferman Jr. was one of four children born August 19, 1942, in Louisville, Kentucky to the union of James Ferman and Doris Vickers. James (aka “Brother and “Uncle Brother”) attended Virginia Avenue Elementary, Duvalle Junior High School and graduated from Central High School. James was the Team Captain of the football team at Central High School. He was named to the Louisville, Kentucky City All Star Football Team for two consecutive years. He also enjoyed being an active member of the Jack and Jill, Inc. during his youth. James affiliated with Third Central United Christian Church, after accepting Jesus Christ as his Lord and Savior. He was an active participant in church ministries as a youngster, including singing in the Young Peoples Choir, attending Vacation Bible School, and participating in Christian youth fellowship. After graduation from high school, he attended the University of Illinois where he was initiated into the Kappa Alpha Psi Fraternity, Incorporated. In 1966, he enlisted in the United States Air Force and served 4 years. After his service in the Air Force, James attended Sullivan Junior College of Business and earned an Associate of Science degree in Business in Professional Accounting and Business Administration in 1977. James married Miriam Chisley on June 26, 1993. Despite his struggles, he was a good provider. He enjoyed watching football games, watching movies with Miriam, and eating her delicious meals. He was an avid UofL fan. James retired from the U.S. Postal Service after 24 years of dedicated service. The marriage lasted 25 years until Miriam died in 2018. James was preceded in death by his parents, wife Miriam, and siblings: Doris J. Shontee, Gordon S. Ferman, and Jacqueline Ward. After his retirement, his illness worsened, and he developed additional medical problems. His stepdaughter, Marilyn looked after his needs and moved him to the Hillcreek Rehab and Care facility. He made friends there and attended church services. He is survived by two stepsons James Chisley Jr. of Weatherford, TX and Louis Chisley (Joan) of Cincinnati, OH, two stepdaughters Marilyn A. Boyd (James) of Louisville and Jacqueline Kinteh of Louisville, 13 step-grandchildren, cousins Rev. Mansel Vickers and Ludie Vickers, brother-in-law James Ward Sr. of Cary, NC, sister-in-law Karyl Ferman, three nieces Dawn Stith (Carl) of Maplewood, NJ, Audran M. Downing (Antonio) of Laurel, MD, Dr. Basha Ferman of Louisville, three nephews Ceph F. Shontee of Louisville, James Ward Jr. (Charise) of VA Beach, VA, Christopher Ward (Kia) of Philadelphia, PA and a host of family and friends. In place of flowers, contributions may be made to https://namilouisville.org/ Visitation will be from 10am - 12 noon Saturday, Feb. 26, 2022 at Watson Memorial Baptist Church, 7217 Nachand Lane with funeral services to follow at 12 noon. Burial will be Tuesday, March 15, 2022 at Kentucky Veterans Cemetery, Radcliff, KY.

The family of James J. Ferman, Jr. created this Life Tributes page to make it easy to share your memories.

Send flowers to the Ferman, family.