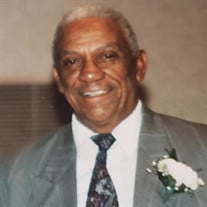 Our Hero – Our Patriarch The righteous man walks in his integrity; His children are blessed after him. Proverbs 20:7 James Horace Hunt was born April 3, 1931 to the late Andrew Hunt, Sr. and Estella Russell Hunt Grier in Macon, Georgia. He was preceded in death by his son, Charles Curtis "Pops" Hunt and four brothers: Andrew Hunt, Jr., Charles Ezell Hunt, Bobby Lee Grier and William "Billy" Grier. He was baptized at an early age at Aberlena Baptist Church and was educated in Macon Public Schools. He received an Associate in Applied Science in Electronics Technology at the United Electronics Institute in Louisville, KY. Jim joined the U.S. Army achieving the rank of Sergeant First Class. He was a Korean and Vietnam veteran. He received the Bronze Star Medal and he twice received the Army Commendation Medal. He served as Chief Mechanic and Instructor in Electronics in the Signal Corps which manages communications and information systems as the “eyes and ears” of the U.S. Army. He retired after 23 years with an honorable discharge. He then became an Instructor at the National Education Center (KY Technical Center of Technology) where he retired after 17 years of exemplary service. He transitioned from this life on Tuesday, March 16, 2021. Jim leaves to celebrate his memory: his devoted wife, Helen, and his sister, Betty G. Tinsley; brothers, Benjamin F. Grier, Tony S. Grier, niece, Kimberly Tinsley all of Macon, Georgia, and nephews, Tony Grier and Michael Grier of Orlando, Florida. And, his children in love: Wilma Boulware (Gary), Melvin Faulkner, Rev. Linda Bunton (Bill), Raymond Faulkner (Kimberly) of Tampa, Florida, and Jack Faulkner (Theresa) and a host of grandchildren and great-grandchildren and countless family and friends. Walk through visitation: 10am-11:30am Thursday, March 25, 2021 at Burnett Avenue Baptist Church, 6800 Hurstbourne Pkwy, funeral service to follow at 11:30am. Burial in Kentucky Veterans Cemetery, Radcliff, Kentucky. Service will be livestream at www.burnettavebapt.com

Our Hero &#8211; Our Patriarch The righteous man walks in his integrity; His children are blessed after him. Proverbs 20:7 James Horace Hunt was born April 3, 1931 to the late Andrew Hunt, Sr. and Estella Russell Hunt Grier in Macon, Georgia.... View Obituary & Service Information

Our Hero – Our Patriarch

Our Hero – Our Patriarch

The righteous man walks in his integrity;...

Send flowers to the Hunt family.