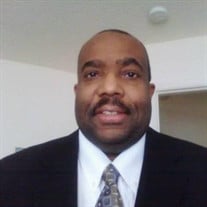 John Lesley Daniel Hairston was born April 9, 1964 in Cleveland Clinic, located in Cleveland, Ohio. He was the first of two children born to Helen Carol Covington Hairston and Raleigh Daniel Hairston. John was later joined by his younger sister Karen Nancy Hairston-Franzel. John's grandparents, who loved him dearly, were the late Reverend Samuel Harding and Elsie (Wilson) Hairston. His maternal grandparents were the late Reverend George Edwin Covington (Anne) and the late Mrs. Louise Anthony Covington Sutton (William Lesley). John Lesley Daniel, a native of Cleveland/Shaker Heights, Ohio was a graduate of Shaker Heights High School (Class of 1982) and Hampton University in Hampton, Virginia. There he earned a Bachelor's of Arts degree in Mass Media Communication and Journalism. At the time of his demise, he was pursuing a Master of Arts degree in Theology at Virginia Union University in Richmond, Virginia. John's resume shows part of his work experience as owner/program director of the following on-line radio stations: www.1067TheBridge.com, www.TheGospelBridge.com, and www.OurRadioNetwork.com. John Lesley Daniel served over thirty (30) years in the radio industry. He was a radio program consultant. He previously served in positions including on-air radio personality, reporter, and news director. He graced the airways in cities including Hampton, VA; Norfolk, VA; Washington, DC; Cleveland, OH; and San Antonio, TX. As noted above, he owned three radio stations, and without going into great detail over his extended personal and professional life, he was very involved in the following: news announcer, writer, KSTX 89.1 radio station San Antonio, TX and KTFM 94.1FM; KBBT 98.5; and the National Public Radio Broadcast also from San Antonio, TX. Prior to moving to Texas, John lived and worked in Washington, DC. There he was a staff writer for the Counsel of The Great City Schools of Washington, DC. He worked as a radio news announcer for the Voice of America in the District of Columbia. In the area of Silver Spring, MD he worked with his cousin George C. Hairston with his organization called Success Warriors. There John worked as a staff consultant and grant proposal writer. After this John went on to work for several radio stations in Washington, DC including WDJY-100.3FM, and WMMJ-102.3FM, and then on to Howard University where he was a radio announcer/on-air personality at WHUR-96.3FM. John got his start in radio at Hampton University. After graduation he worked at WHOV-88.3FM in Hampton, VA as an on-air personality/news announcer and at WOW1-103FM in Norfolk, VA. John's sister, Karen Nancy, in looking at him in the photo at his mic with his headphones on, said, "this really captures John in his element. He loved working in radio and never gave up on his dream of running a radio station, even during the darkest hours of his life. That will forever be his legacy. " John, who was a loving and giving person, was brought up as an Episcopalian but later became a Baptist. He joined Walker Memorial Baptist Church in Washington, DC where his aunt Bernice Hairston-Brown was a trustee and other relatives were attendees there. His pastor there was the late Rev. Reginald Green. Upon relocating to San Antonio, TX he joined his mother's church, The Second Baptist Church. As indicated, John loved doing radio shows, listening to music, and compiling playlists. Networking, keeping in contact with acquaintances, and helping people to achieve their goals was a big part of what made John so likable and successful in his endeavors. He maintained friendships with members of the Ludlow Association, The Hampton Alumni, and the Antioch Baptist Youth Group. Featured prominently on his radio stations were services from The Rev. Marvin McMickle of Antioch Baptist Church and his predecessor; his childhood friend Allen Waller, pastor of Enon Baptist Church in Philadelphia, PA; and, Rev. Otis Moss III in Chicago. He also loved family and friends, and delighted in facilitating Zoom (virtual) and in-person family gatherings. He helped his cousins, in particular Angela Brown-Franklin, and Tanika and Tamara Henry, provide the last virtual family gatherings of 2020 and 2021. John was also a regular member of his family's Tuesday Night Prayer Call. He was preceded in death by his late grandparents, and mother, the late Professor Helen Carol Covington Hairston. He is survived by his wife Benjie De los Reyes-Hairston, his sister Karen N. Hairston-Franzel (JD), his brother-in-law Steven Charles Franzel (PhD), nephews Daniel Hairston Franzel and Jason Hairston Franzel, and his father the Rev. Dr. Raleigh Daniel Hairston (Retired Episcopal Priest) of Maitland, FL; and, numerous family members and friends. He was especially close to his mother's brother and chess playing partner Dr. Karl Covington (MD) of Houston, TX. In lieu of flowers the family requests that donations be made in John's name to Hampton University, Mass Media Department, Hampton, VA (Email: [email protected]). Visitation: 11am -12pm Friday, April 15, 2022 at A. D. Porter & Sons Funeral Home, 1300 W. Chestnut St., funeral service to follow at noon, burial in Cave Hill Cemetery. live stream: https://vimeo.com/event/2030436

The family of John Lesley Daniel Hairston created this Life Tributes page to make it easy to share your memories.

Send flowers to the Hairston family.