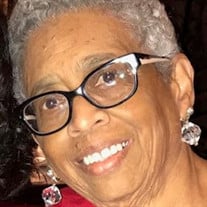 Celebration of Judy Grain Johnson Judy Alyce Louise Grain was born on April 12, 1940 to Walter and Dorothy Grain in Brooklyn, New York. By the age of 3, she had moved to Louisville, Kentucky. Judy thoroughly enjoyed spending time at her Grandmother’s house, hanging out with family and cultivating what would turn into lifelong childhood friendships. She attended Jacob School in Harrods Creek, KY where she excelled in her studies, skipping a grade and going into high school earlier than planned. In 1956, at the age of 16, Judy graduated from Central High School and went on to Kentucky State University in Frankfort, KY. In 1958, she joined the Beta Zeta Chapter of Alpha Kappa Alpha Sorority, Incorporated where she completed numerous service projects working with children to enhance their learning and education. Subsequently, in 1960 Judy graduated with her Bachelor of Arts and began her lifelong career as an educator. Throughout her 30-year career, Judy taught thousands of students within the Jefferson County School System in grades 3, 5, and 6. She cherished being in the classroom and loved being able to touch and shape the lives of her students in the best way she knew possible. Kentucky State University was also where she met the love of her life, George Johnson. On June 27, 1964, they were married in Louisville, KY. Judy then moved to Topeka, Kansas where George was stationed by the United States Air Force. While in Topeka, Judy took classes at Washburn University to further her education. After George completed his military requirements, they moved back to Louisville to begin their family where they welcomed Melanie, Gregory and Derek. Following in the footsteps of her Mother, a cofounder of Louisville’s first chapter of Jack and Jill, Judy joined and remained active throughout her children’s formative years. Judy held various positions within Jack and Jill which included Chapter President from 1982 to 1984. During her tenure, she worked diligently with the chapter to initiate the Annual Jack and Jill Debutante Ball, which is still ongoing to this day. Judy was an active member with Church of Our Merciful Saviour where her grandparents also worshipped. She worked tirelessly within the Church, organizing rummage sales, formal dances, church picnics, and providing after service coffee hour. Judy continued her service to the Lord as a Sunday School teacher, Superintendent of the Sunday School Program and coordinator for several Annual Summer Vacation Bible Studies Programs. After Judy’s retirement from Jefferson County Schools, her love for children spurred her to continue private tutoring for more than 14 years. She continued to provide service to the community through the Eta Omega Chapter of her beloved sorority, where she is honored as a Golden Soror. Judy also served on the Board of the Louisville Cemetery Association, Inc. Judy is preceded in death by her parents, Walter and Dorothy Grain; son, Gregory T. Johnson; brother and sister-in-law, Clark and Elsie Grain and grandson, Josue’ Hart. She is survived by her husband of almost 58 years and best friend of 66 years, George Johnson; her children, Melanie Butler of Maryland (Dustin), Derek Johnson of Texas (Lauren) and daughter-in-law, Monique Johnson of Georgia. Her memory will also be forever cherished by her grandchildren, Mercedez Lockett-Hart (Gia), Quincy, Gabrielle and Soren, as well as her great-granddaughter, Noa. She will be loved and fondly remembered by her Siblings, Malcolm Grain (Yolanda), Walter Grain, Clark Cox II (Kathy), Peter Grain (Annette), Gale Monk (Thelonious, III), David Grain (Lisa); brother-in-law, William Johnson (Kaye) and sister-in-law, Martha Means (Jay), as well as numerous nieces, nephews, cousins, neighbors and friends. A Memorial service is planned for 11am Wednesday, June 8, 2022 at Church of Our Merciful Saviour, 473 S. 11th St., Louisville, KY 40203. No repast to follow. Masks are Mandatory inside of the Church. Expressions of sympathy may be made to the HBP Foundation through her beloved sorority. HBP Foundation, P.O. Box 21721, Louisville, KY 40221. In the memo section of the check please write, "In Memory of Judy G. Johnson".

Celebration of Judy Grain Johnson Judy Alyce Louise Grain was born on April 12, 1940 to Walter and Dorothy Grain in Brooklyn, New York. By the age of 3, she had moved to Louisville, Kentucky. Judy thoroughly enjoyed spending time at her Grandmother&#8217;s... View Obituary & Service Information

The family of Judy G. Johnson created this Life Tributes page to make it easy to share your memories.

Send flowers to the Johnson family.