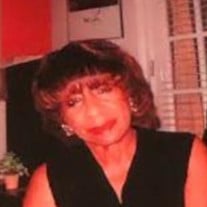 June L. Cleveland, 87, of Louisville, Kentucky, "The Good Sister" as she was affectionately called, went to be with the Lord on Friday, December 18, 2020. June L. was born on April 12, 1933 in Louisville, Kentucky, youngest daughter of the late George and Octavia Daugherty. She is the baby of this large loving family, and the last sibling to be called home. June L. attended Central High School in Louisville, Kentucky graduating at the top of her class and held various honors. After high school, June L. was recognized for talent and musical abilities, and was accepted into the Juilliard Music School in New York, New York. June L. married Otis T. Cleveland and together they had eight children, survived by seven, Patrice Walton, Otis T. Cleveland, Jr., Joyce L. Barnett, Valerie Janssens, Yolanda Cleveland-Williams, Kimberly Cleveland and Joseph A. Cleveland. David C. Cleveland, the youngest of the Cleveland children, passed in January, 2020. June L. provided years of service work in her community and in her church. She attended and founded the nurses' guild at Community Missionary Baptist and served for years. After the passing of her husband, she moved on to Florida and made Bethel Baptist Church in Jacksonville, Florida her church home. Continuing her life work for the least of these in her community, she continued to serve many members in her community providing "Meals on Wheels" services for the sick and shut-in. She also founded and worked in a community clothes closet which helped clothe the homeless and less fortunate while providing love and compassion to everyone she came in contact with. June L. was a wonderful cook and provided catering services for many events and activities in the community. She was always recognized and praised for her many charitable deeds to the least of these. We will be celebrating the Life and Legacy of June L. "The Good Sista" which will be held at 11:00 A.M. on Tuesday, December 29, 2020 at A.D. Porter & Sons, located at 4501 Bardstown Road, Louisville, Kentucky 40218. Due to limited capacity, visitation will only be allowed from 9:00 A.M. - 11:00 A.M. prior to service. Funeral service will be for immediate family only.

The family of June L Cleveland created this Life Tributes page to make it easy to share your memories.

Send flowers to the Cleveland family.