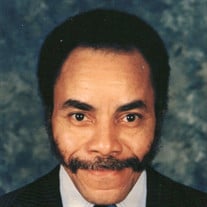 Samuel Upshaw, Sr. was born March 8, 1939, in Crenshaw County, Alabama to the late Virger Mae Upshaw and the late Hubert Douglass Upshaw. Two years later he was joined by his baby sister, Ruthie C. Oliver. He graduated from Crenshaw County High School in 1958 and later attended trade school where he obtained his barber’s license. He married the love of his life, Mary L. Parmer, in 1962 and they later relocated to Louisville, Ky. in search of better employment opportunities. After several short stints working as an orderly and a dry-cleaning technician, he secured employment with General Electric in 1966 where he remained for 30 years. They purchased their life-long family home in March of 1969 and together they raised three children; Cedrick Yelder, Samuel Upshaw, Jr. and Pamela Upshaw. In 1967, he was baptized as one of Jehovah’s Witnesses where he regularly engaged in field service, attended weekly meetings and conducted family bible studies. In later years, his illnesses did not allow him to attend meetings in person, but he never wavered in his faith. He lost the love of his life in November 1994 and never re-married. Despite his heartache, he found enjoyment in reading books and magazines, playing his harmonica and laughing and arguing with his uncle, Rudolph Hunter. He also enjoyed strolling down memory lane with his baby sister, Ruthie. He succumbed to his battle with multiple illnesses on October 19, 2021, but his kind heart, sweet personality and willingness to help anyone will never be forgotten. He leaves to cherish his memory three children, Cedrick (Phyllis), Sam Jr. and Pam; two grandchildren, Shay and Kayla; two great-grandchildren; his sister, Ruthie, two sisters-in-law, Pat and Edna, one brother-in-law, Albert, and a host of nieces and nephews. From the children He was known as “Mr. Sammy” in the community. When the neighborhood children heard his name, they became excited about the prospect of piling up in his car and taking a ride to the Hogan's Fountain playground area in Cherokee Park. In those days, you couldn’t find playground equipment of that quality in the nearby Shawnee Park. For parents, his name exemplified decency and trust and the comfort in knowing their children would be safe and protected under his care. If there was a need for a ride to the store, a household repair or a fresh haircut, people knew they could always count on “Mr. Sammy.” However, his co-workers nicknamed him Banana Man because he kept a fresh stash of his favorite fruit close by during his 30 years on the job at G.E. Every Friday after work, we looked forward to him taking us to Triple Triangles for cheeseburgers. Our favorite part of the week. He faithfully cared for his ailing wife and later his mother who both transitioned before him, but he remained an immense presence in the lives of his loved ones. He has moved on from this earthly life, but his legacy will live on and sustain us. Yep, his name was “Mr. Sammy,” but of course we never called you that. Because to us, you have always been and will always be Daddy. With Love from Your Children All services will be Private.

The family of Samuel Upshaw, Sr created this Life Tributes page to make it easy to share your memories.

Send flowers to the Upshaw, family.