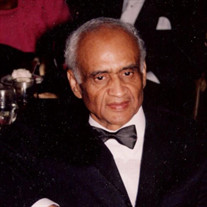 William Phillip Swafford, Sr. 81, was born on February 14, 1940, and was a native of Louisville, KY. That his birthday was on a day when love is celebrated could be no more fitting, as he exemplified love in every facet of his character. He instilled in his children and grandchildren the fundamental belief that God is love and that life’s fundamental purpose is to spread God’s love and be of service to others. William, affectionately known as Billy or Bill by those near and dear to him, passed away Friday, December 3, 2021, as peacefully, quietly, and unassumingly as he lived his life. His loved ones will continue to honor his legacy by living the values he modeled throughout his life: humility, gratitude, selflessness, compassion, honesty, dependability, forgiveness, being slow to anger, always “taking the high-road”, always finding the good in others, piety, and spreading love. After graduating Central High School in 1957 William attended Livingstone College, graduating in 1962 with a Bachelor of Arts degree. He then enlisted in the U.S. Army, serving in the Fort Knox Military Police. Choosing to pursue a career in social work, he completed his Master of Science degree, graduating from the University of Louisville Kent School of Social Work in 1969. The bulk of William’s career was spent in service to children and youth, working to support the juvenile justice system and those who found themselves in residential care, followed by serving as an educator in the Jefferson County Public School System. A self-taught jack of all trades, he was renowned for his carpentry and home improvement skills. During his retirement years he continued to be of service, working for the United States Census Bureau and volunteering in various capacities throughout the community. He was first introduced to the Lord as a child, becoming a member and eventually Associate Pastor of Hughlett Temple AME Zion Church, his family’s church. By far one of William’s most dearly loved volunteer efforts was the service he gave to his faith and the Christian Science Church, serving both the First Church of Christ, Scientist and the Second Church of Christ, Scientist here in Louisville, KY throughout most of his adulthood. He faithfully practiced one of the core beliefs – understanding the power of prayer and therefore, praying about everything. He religiously studied the Word of God and journaled affirmations and tenets that are now treasured gems for the loved ones he leaves behind. William enjoyed simple pleasures in life such as riding a bike, going to the library, going to the movies, caring for pets near and dear to him over the years, and taking road trips to visit family and friends. He absolutely adored his grandchildren – being a steadfast presence at all events and occasions – and equally adored his great- grandchildren – making as many weekly visits as possible to sugar them up with treats and share his wisdom and love. William was preceded in death by his mother – Aberdeen Crumes, step-father – Jack Crumes, Sr., father – James Swafford, and sister, Ella Henderson. Those left to cherish his precious memories include: his children - William Swafford, Jr., Carlton Swafford (Kate), and Adria Johnson; his grandchildren – Brenlie Rhodes and Kenneth Rhodes II; his great-grandchildren – Kyeus Lee William Stark and Amerie Faith Stark; his great-goddaughter – Kamea Davis-McClendon; his siblings – Robert Swafford (Pamela) and Jack Power Crumes, Jr.; his ex-wife – Brenda Swafford; and a host of aunts, cousins, nieces, nephews, and friends. Visitation: 11am-12pm Saturday, December 18, 2021 at A. D. Porter & Sons Funeral Home, 1300 W. Chestnut St., memorial service to follow at noon.

William Phillip Swafford, Sr. 81, was born on February 14, 1940, and was a native of Louisville, KY. That his birthday was on a day when love is celebrated could be no more fitting, as he exemplified love in every facet of his character. He... View Obituary & Service Information

The family of William P. Swafford Sr. created this Life Tributes page to make it easy to share your memories.

Send flowers to the Swafford family.