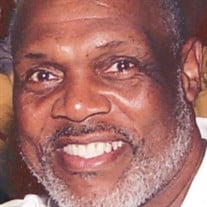 Willie David Jackson was born November 6, 1944 to the late Annie Pearl Sellers and Hezekiah Jackson in Hayneville, a small town in Lowndes County Alabama. He is one of nine siblings, six girls and three boys. The family moved to the city of... View Obituary & Service Information

The family of Willie "Hobo" David Jackson created this Life Tributes page to make it easy to share your memories.

Willie David Jackson was born November 6, 1944 to the late Annie...

Send flowers to the Jackson family.